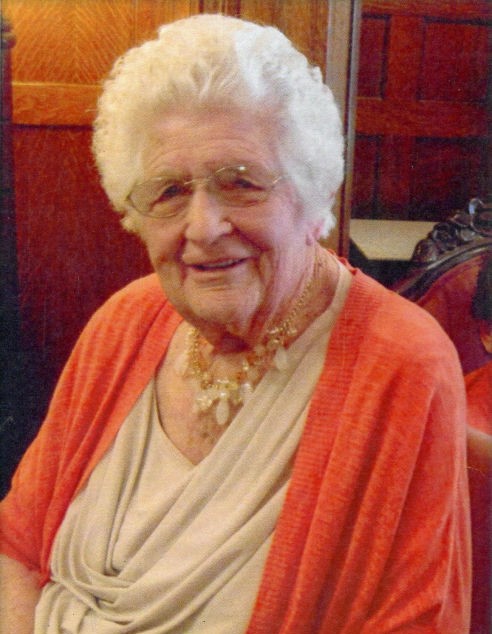 After many years of service to family, church, and community, Wilma Hyer Spence was called home to be reunited with her husband, other family members, and friends on April 11, 2019.

Wilma was born August 23, 1921 to Andrew William Hyer and Emma Elaine Hillyard in Lewiston, Utah. She graduated from North Cache High School. At the end of WWII, she met Mark Spence of Wellsville, Utah. They were married on June 4, 1946 in the Logan, Utah Temple of The Church of Jesus Christ of Latter-day Saints. They made their home in Garland, Utah.

Wilma was an active in the church and community. She served for many years as a primary teacher and as a visiting teacher. The calling she loved best was compassionate service leader. She helped organize many funeral dinners, as well as dinners to families in the ward in times of need. She also made many quilts for the church Humanitarian Center.

Many people in the community remember getting a visit and a plate of cinnamon rolls from her. She was an active in the American Legion Auxiliary. She received the Wheelon award for service to the community. She volunteered at the Tremonton Food Pantry. She worked as a cook for the Western Trails Café for many years.

Wilma and Mark were both devoted to their son, Clyde, who resides at the Utah State Developmental Center in American Fork, Utah. They visited often. She was a member of the MRAU. She loved to embroider dish towels which she gave away.

She is preceded in death by Mark, her husband of 53 years, an infant daughter, Joyce, her daughter Colleen McCraw of Hooks, Texas; her parents, and all her siblings.

She is survived by her children, Peggy Augustine of West Jordan, Utah, DeAnn (Nelson) Sagez of Garland, Utah, and Clyde Mark Spence of American Fork, Utah. She has eight grandchildren and 12 great-grandchildren.

The family wishes to send special thanks to the staff at “Our House” assisted living in Tremonton and her hospice nurses for taking lovely care of our mother and grandmother.